Out Of Marbles Store

Out Of Marbles carries a range of high quality 3D printable marble machines.

Browse from the following categories: I'm Luka, 30 years old and I am behind the Out Of Marbles brand. Recently my wife Tamara also joined me, to help with customer service, photo shoots or brainstorming about ideas for new designs :)

I did a computer science major and 90% of my time I spent on computer... This is true ever since the times when we had to unplug phone lines to go online :)
I also love to do stuff with my hands, to make something physical.

And 3D printing is in essence making something out of scratch, and of course being on computer because you need to design what you make :)  So this was a natural progression for me.

When i was a boy, I used to love toys. (Duhh, who didn't?:) )
I remember being in love with those plastic marble tracks that you can buy in the stores and make modular marble tracks with them, and then drop the marbles at the top and watch them go down.

I was born in 1991 in Slovenia which is located in Europe, and was at that time part of Socialist Federal Republic of Yugoslavia. Two months after my birth, there was a brief war for independence. Times were not easy back then so we could never afford any marble run toys, so I just played with a bag of marbles instead :)

it is 2017, my GF (now wife) got an early inheritance gift, an apartment, but in need of major renovations. It was also my 26th birthday, and that's when in my country you can't work as a student anymore... and well... they didn't want to hire me full time after that. So I renovated the apartment and then 2018 rolled around... And GF got a job offer in the Netherlands. I was jobless and her pay was very nice, so we got married on two weeks notice and moved to The Hague :)
I always wanted to be my own boss so it was only a matter of time before I start a real company... I had a ton of ideas, but in the end, I decided that I want to play with marbles... I bought Chinese Anet A8, printer for 120€, just to dip my toes into it, if i will like it or not. Well needless to say, I liked it, and then i went on and designed my first small marble machine, that was hand operated, and it was free. I wanted to see what people would think, and if its something that I can do and find interesting. Here is a link: https://www.thingiverse.com/thing:3160563

I was lucky that wife had a great paying job, so I could spend my time fooling around with marbles. I then went on to design "The Two Wheeler" Marble Machine. It took me a year of on/off modelling, and I was also learning Fusion 360 at the same time (program which I 3D model in and its free to use).

In April of 2021 we have permanently moved back to our country Slovenia. It was nice abroad but it is not the same as home. Two reasons were: wife was not happy at her job, and I had outgrown my small office.
I now rent a business space with a space of 130m2 (In the Hague I had my office of 6m2). My wife also joined me now and she is teaching herself how to design her own models like personalized cake/cupcake toppers, and baby showers/wedding gifts etc...

Join Out Of Marbles club to get updates on new releases and get 10% OFF your first order!

Let customers speak for us

some difficulty to print, but solved problem 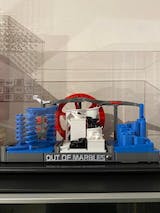 Very nice. I had some printing problems, I didn't understand if wet filament or anything else. Printing stops many times, the piece splits into layers and breaks. I repeat the print with a different coil, the same. I do the printer reset, repeat the adjustments and finally start again and get to the bottom. To try to bind the material better I increased temperature and reduced speed to 50. mm/s. The only problem, the finish is coarse and the marbles do not flow well. Done a thorough retouching with small grinding wheels for the nails and putting talc at the point where the marbles split into the path, the talc is distributed and runs better.

Products generally are quite good, but had problems with one module - emailed twice, and put loads of posts and pictures on Discord. No response. Disappointed with after sales service 🙁

My son and I printed and assembled the Two Wheeler while he was home for Christmas. The models printed smoothly and we had a great time. Great project!!

This kit was perfect. The connections were easy and I was up and running in no time. I was thinking of sourcing this myself, but I couldn't beat the kit price, especially when it is on sale!